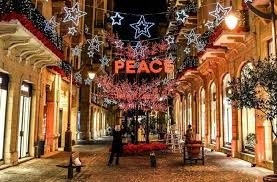 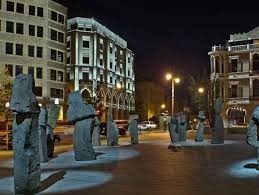 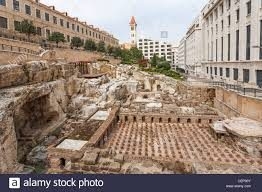 The Beirut Central District (BCD) or Centre Ville is the name given to Beirut’s historical and geographical core, the “vibrant financial, commercial, and administrative hub of the country.”At the heart of Lebanon’s capital, Beirut Central District (BCD) is an area thousands of years old, traditionally a focus of business, finance, culture and leisure.

It is situated on the city’s northern coast and is easily accessible from all parts of the city. This includes the adjacent Beirut Seaport and Rafik Hariri International Airport. Major roads converge on it or from boundaries to the east, south and west, or line its 1.5 km (1 mi) long seafront to the north.

Today, Beirut Central District hosts the Lebanese Parliament, the Lebanese Government headquarters, the Beirut Stock Exchange, the regional offices of the United Nations, International Labour Organization, UNESCO, and World Bank, as well as the headquarters of the ESCWA and the Union of Arab Banks.

Heritage Trail
The Heritage trail is a pedestrian circuit in the city's historic core and the traditional Beirut city center. The trail connects the main archaeological sites, places of historic interest, monuments and heritage buildings which are important to Beirut's rich past. The trail's path is marked by bronze medallions grouted into the sidewalk, with large general or district panels and smaller monument panels made from glazed lava stone tiles with texts in three languages (Arabic, French, English). The Heritage Trail is planned to start and end at the "City History Museum" on the ancient Tell Area. In an initial phase, pending the completion of the museum, the circuit will start at Beirut Souks, which retain the 2500-year-old ancient street grid and Ottoman access gates, and several other archaeological remains like the Phoenician-Persian quarter, Byzantine mosaics, old city wall and moat. The trail is divided into four major sections:

First Route: The first route in the heritage trail covers the ancient archaeological "Tell Area". This site receives special treatment and lots of attention due to its significant historical importance, integrating several neighboring vestiges: preserved part of the Canaanite wall and gate, Phoenician glacis, Hellenistic remains, crusader castle foundations above earlier Roman fortifications, and remains of the Ottoman citadel. The future site museum will display remains from the Tell area and other archaeological sites which are part of the heritage trail. A sinuous underground path guides visitors through Canaanite, Phoenician-Persian, Hellinistic, Roman, Byzantine and Medieval ages.
Second Route: This section of the Heritage Trail will straddle along several significant Beirut landmarks and buildings like the Town Hall, Parliament, Mohammad Al-Amin Mosque, Saint George Maronite Cathedral, Garden of Forgiveness...etc. The route will also stroll along the arcaded streets of Maarad leading up to the Grand Theater historic building and numerous stone churches and Mamluk-era mosques.
Third Route: This segment of the pedestrian circuit revolves largely around the "Roman Baths Garden" and the Grand Serail. The Roman Baths Garden at the base of the Serail Hill exhibits brick vaults, remains of ventilation networks, old water heating apparatuses, bathing areas among other archaeological remains from the bathhouse. The route also passes by terraced gardens, fountains, Olive and Pine groves, a small amphitheatre, leading all the way up to the hilltop where the route terminates at the Grand Serail, Hamidiyi Clock-tower, Council of Reconstruction and Development, and the St. Louis Capuchin crusader church.
Fourth Route: The fourth route in the Heritage trail lies substantially within the Beirut Souks area. This route contains the Phoenician-Persian quarter, Roman-Byzantine findings, part of the Medieval moat and the Ottoman wharf. Some mosaics, remains, or arcades will be integrated into the new buildings. Other points of interest along the route are the "Zawiyat Ibin Iraq" shrine, Majidiyya Mosque, and the "Antoun Bey Caravanserai". Another section of the route displays a late Roman house with an internal garden paved with mosaics and an elaborate water and drainage system, Byzantine portico paved with mosaics and labeled shops, Phoenician storage jars, Mamluk potter kilns...etc.

Garden of Forgiveness
The Garden of Forgiveness is a project under development in the BCD. The garden is a socio-cultural project that commemorates the scars of the Lebanese Civil War, hence its location along the Green Line that once divided the city between warring factions. Members from more than six religious denominations have participated in the concept, plan, and development of the project

St. Georges Cathedral Museum
It is a crypt museum at the St. Georges Greek Orthodox Cathedral on Nejme Square. It is a relatively small museum that reveals layers of Christian heritage belonging to a series of seven churches built on the same exact site starting 2000 years ago

Beirut City History Museum
The Beirut City History Museum is a proposed project by Solidere on an archaeological site north of Martyrs Square. Excavations on the site in the mid-1990s unearthed such significant finds as the Phoenician Tell, the Bronze Age city gate and remains from the Persian, Hellenistic, Byzantine, Medieval and Ottoman periods. Shortly after Solidere commissioned french architect Michel Macary, known for his design of the Louvre extension, to undertake the initial study of the Tell and explore the concept of the site specific museum. The museum's design will be integrated with the Martyrs Square underground parking, the Petit Serail and the landscaped garden at the Martyrs Square and Tell site.

Solidere commissioned renowned Italian architect Renzo Piano to study the square's architectural and urban design, including the Beirut City History Museum, in cooperation with the Ministry of Culture. In order to safeguard the location while providing vehicle and pedestrian access in a heavy use environment, Solidere commissioned a study of three road options and a detailed design of the most appropriate one. The chosen option incorporates a two-way road and bridge structure on the east side of the Tell and underpasses to ensure pedestrian connection to the museum.