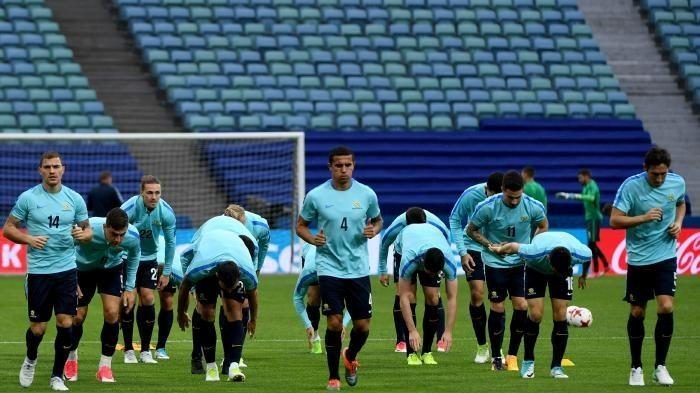 AUSTRALIA will on Monday night face a German side almost unrecognisable from that which claimed the world title in Brazil three years ago, but coach Ange Postecolgou has warned against considering them weakened opposition.

Only Shkodran Mustafi, Matthias Ginter and dangerous PSG winger Julian Draxler from the World Cup winning squad have been selected for the Confederations Cup campaign, as Joachim Low looks to experiment in readiness for the defence of their world crown next year.

However, a youthful, talented side will have plenty to prove against the Socceroos, presenting a different set of dangers for Postecoglou’s men.


Eight victories and two draws in their previous 10 matches, scoring 31 goals and conceding just two, shows the Germans to be in commanding form.

“They’re doing the right thing,” says Postecolglou. “They’ve stated that they want to win a World Cup in 12 months time and this is part of their preparation for it. We’ll be ready for it.

“At the end of the day it’s Germany footballers come tournament time, they always perform well.”

“While others may think there’s some sort of weakened aspect to it, that’s not how we’re approaching it. One thing we won’t underestimate is their ability to play the kind of football they’ve been renowned for.”

Postecoglou was buoyed by his entire squad taking part in full training this week, with Robbie Kruse shaking off a knock to the knee suffered in the recent friendly defeat to Brazil.

“They’re a good side, obviously we know that,” says Socceroos striker Tomi Juric. “They’re coming with a young squad with a lot to show, some players pushing for World Cup spots for next year.

“We’ve done some reviews on them and they’re looking pretty dangerous going forward, but then again there are some areas we can use and punish them. If we do that wisely, and play our game that we’ve been structured to play for a number of years now, we can potentially make a lot of problems for them.”

With games against Cameroon and Chile to come in the following six days after the Germany clash, it is vital for the Socceroos’ chances of going deep in the tournament to get a positive result against the Germans to set a tone for the competition.

“In any tournament the first game’s pretty crucial,” says Postecoglou. “A strong performance against a team like Germany gives you confidence to face anyone.

“At this stage we’re just making sure everyone’s in the right condition, physically and mentally. So far the players have been good. We had a long trip over but they’ve recovered really well. A couple of days training and we’re ready to go.”