Bookmark this
December 13, 2010 By Simona Sikimic 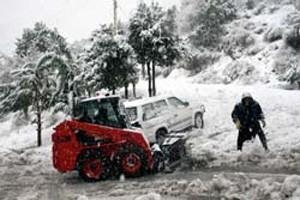 BEIRUT: Some of the worst storms in years lashed Lebanon over the weekend, killing one woman and causing vast material damage.

President Michel Sleiman has urged the services and concerned ministries to stay on high alert, while Hizbullah Secretary General Hassan Nasrallah, in his televised speech Sunday, pledged to assist relief efforts and promised aid for personal and property damage.

Roula Mohammad Tarek became the first victim of the vicious weather engulfing the east Mediterranean Saturday when an uprooted tree fell on her car, killing her. No major injuries have since been reported in Lebanon but Sleiman continued to advise people to take “all necessary precautions.”

The country has experienced surface winds of up of 100 kilometers per hour (km/ph) and has seen a month’s worth of rainfall in just 48 hours. Conditions are expected to improve Monday evening.

Dozens of fishing boats lie in tatters across the coast, littering Beirut’s Corniche and causing chaos in Sidon where waves, reportedly up to five meters high, forced the evacuation of the police station and battered port personnel offices.

In Tyre bricks and whole balconies were blown from buildings as winds proceeded to rip out street and road signs.

“We mobilized all personnel during the storm to reach citizens’ needs since the public service by the Internal Security Forces (ISF) can’t be effective by itself,” Tyre municipalities’ union president Muhsen al-Husseini said in a statement.

Several inland highways became inaccessible as fallen trees blocked roads and pools of water engulfed routes, closing the main Dahr al-Baidar road linking Beirut and Damascus to all cars not fitted with snow chains, and also isolating parts of the Akkar and several villages in the northern Bekaa Valley.

“We have been working extremely hard to rescue people who have become trapped by the heavy snowfall and rain,” the director of Civil Defense operations, George Abu Moussa, told The Daily Star.

“We have had a lot of problems with electricity poles falling which have threatened to block our access in addition to closing it [to civilians],” said Abu Moussa. “But we are prepared and doing everything we can.”

Despite media reports of flight cancellations, authorities claim no flights were grounded because of the weather Sunday and insist Beirut’s Rafik Hariri International Airport (RHIA) is experiencing only minor delays, with services returning to normal by Monday, an airport spokesperson told The Daily Star.

The heavy rains, however, did wreak “severe damage on airport facilities,” the spokesperson said, rolling over four small parked training planes, one of which collided with a nearby electricity pole.

The precipitation comes after months of unseasonally high temperatures and drought which saw an eightfold reduction in year-on-year rainfall in the months from September and helped propagate a spate of forest fires. “In the space of just a few days we have gone from fighting fire to fighting snow,” said Abu Moussa.

While the country was in need of rain, with so much falling in a short period of time most of the water will wash back into the sea and will not refill underground reservoirs, Wael Hmaidan director of environmental NGO IndyAct, told The Daily Star.

“The snow is not dense and contains a smaller amount of water, meaning it will melt quickly and not contribute to the national water reserves,” he said.

One of the most pressing concerns is that the rain could accelerate deforestation by causing widespread erosion of fertile soil.

The government has invested heavily to fight the trend but the drought and fires have dislodged trees and shrubbery normally responsible for holding together soil layers, said Hmaidan.

Agriculture has also been hit hard by weekend’s storms which blew away greenhouses and destroyed crops. – With additional reporting by Van Meguerditchian, Mohammed Zaatari and Antoine Amrieh.