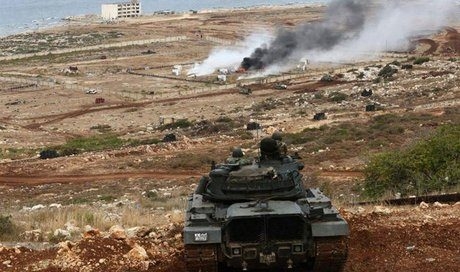 The army renewed firing artillery on Saturday at posts and vehicles of the terrorist Islamic State group on the outskirts of the eastern border town of Ras Baalbek and al-Qaa, the National News Agency reported.

“The War Media outlet said the army was able to inflict casualties among the IS ranks killing and wounding several in al-Mkhayrmeh neighborhood of Ras Baalbek outskirts,” LBCI reported later on Saturday.

The army has been intermittently shelling the IS posts over the past days.

The troops shelled outskirts of Ras Baalbek and the neighboring town of al-Qaa on Friday inflicting casualties and destroying a number of sites.

OnThursday, army units continued their deployment in the outskirts of the nearby border town of Arsal, seizing control of posts abandoned by the jihadist al-Nusra Front group.

Al-Nusra was ousted from the region in a Hizbullah offensive that ended with an evacuation deal.

The army is reportedly preparing a major operation aimed at eradicating IS militants from the outskirts of al-Qaa and Ras Baalbek.