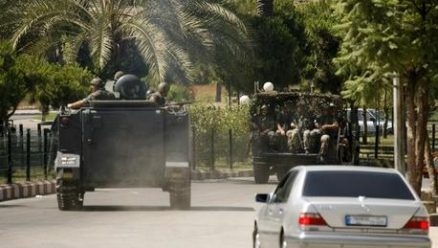 The Lebanese army closed in on Monday on the complex of Salafist cleric Sheikh Ahmed al-Asir's mosque in the southern city of Sidon in an attempt to arrest him for attacking the military and leaving 12 soldiers dead.

The army units in the area near Bilal bin Rabah mosque in the neighborhood of Abra came under heavy gunfire from al-Asir's gunmen, who sought to push the soldiers back by using machine guns and Rocket Propelled Grenades.

Snipers from high-rise buildings helped the fighters in their quest to defend the mosque.

Scores of employees at Sidon's Serail, that lies near Abra, escaped to safety after the building was hit with gunfire.

Gunmen also blocked the road near Sidon's Sea Castle. But the military later reopened it.

Many people living on high floors came down or fled to safer areas, while others were seen running away from fighting areas carrying children. Others remained locked up in their homes or shops, fearing getting caught in the crossfire. Gray smoke billowed over parts of the city.

The city has come to a standstill as the military continued to evacuate the residents of the buildings near the mosque, a sign of an upcoming offensive aimed at ending Asir's armed presence in the city.

But the cleric's whereabouts are not known. There have been claims that he is hiding in the mosque while sources have said he has escaped in an ambulance to an unknown location.

State Commissioner to the Military Court Judge Saqr Saqr issued search and investigation warrants against al-Asir and 123 others including his brother and Salafist-turned singer Fadel Shaker.

Earlier, al-Asir appealed to his supporters through his Twitter account in other parts of Lebanon to rise to his help, threatening to widen the scale of clashes.

The military command said the number of troops killed in the fighting that erupted at noon Sunday rose to 12. There were also more than 50 injuries among the ranks of the soldiers.

However, it was not clear how many fighters were killed in the clashes.

Meanwhile, the fighting in Taamir near the Palestinian refugee camp of Ain el-Hilweh, which had subsided early Monday, intensified after militants from different nationalities belonging to Jund al-Sham and Fatah al-Islam clashed with the army to ease the pressure on al-Asir's gunmen.

The fighting also reached the city's markets after masked gunmen began appearing there. But the army clamped down on them, preventing the clashes from spiraling out of control.

Abra's clashes erupted when al-Asir's supporters surrounded an army checkpoint in the area, where a vehicle transporting other supporters of the cleric had been stopped.

After the armed men attacked the troops with gunfire, the army fired back.

The military command vowed on Sunday to "strike back with an iron fist anyone who... spills the blood of the army.”

It urged political leaders in Sidon to choose sides and to stand either alongside the army, or with "those who promote strife and the killing of troops."

The clashes in the southern city are one of the most intense bouts of violence in Lebanon linked to the conflict in Syria.