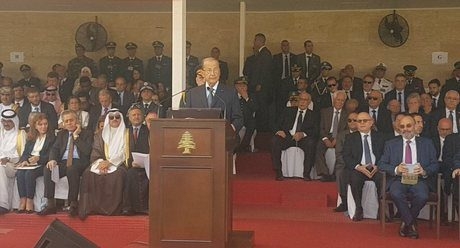 President Michel Aoun assured on Tuesday that Lebanon's military and security institutions are “fully prepared” to confront all forms of terrorism.

“We do not retreat in the face of terrorism in all its aspects and organizations. The army and the security institutions are ready to confront it,” said Aoun during a ceremony marking the 72nd anniversary of Army Day.

“We look forward to liberate a part of Lebanon that has been occupied by terrorism for years,” added the President.

He was referring to the army's battle in the outskirts of the border towns of al-Qaa and Ras Baalbek against militants from the Islamic State jihadist organization.

“You have succeeded at dismantling so many terror cells. We now look forward to our armed forces preparing to liberate what remains of occupied territory and to reveal the fate of your kidnapped comrades,” he added.

“The dangers threatening the homeland are many. Past experience of the 1970s has taught us that the country cannot stay united if its army is paralyzed. Do not let criticism campaigns get into your morale,” the President remarked.

“Fulfilling the army's vow costs us a lot of sacrifices but gives us the comfort of free conscience,” he concluded.