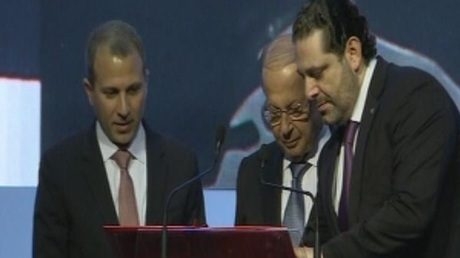 The two men signed the law during the 4th Lebanese Diaspora Energy conference held at BIEL.

At the conference opening, Foreign Minister Jebran Bassil said the political parties are fighting to “devise an electoral law that includes six parliament seats to represent the expatriates.”

Bassil announced the "map of economic integration between expatriate Lebanon and resident Lebanon.”

The Minister addressed the expats and urged them to return back to their homeland, as he assured that Lebanon during the term of President Michel Aoun abides by the National Pact.

For his part, Aoun said: “Lebanon's experience with immigration is painful. Our families are paying a new emotional tax," adding "although you have a duty to fulfill to the nations that embraced you, but you also have a duty of loyalty to your motherland.

“Migration is an emotional tax paid by our families since we changed into a country that exports its children instead of exporting its produce," Aoun said.

The President concluded saying “dislocating from our homeland came as the result of difficult political, social and economic situation that pushed our sons out of their own country.”

Lawmakers from the Lebanese Forces and Free Patriotic Movement signed in 2015 the draft-law on allowing expatriates to regain their Lebanese nationality.

It was approved during a legislative session later that year.