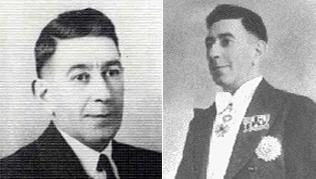 The Lebanese in Australia have been active in politics and a number have risen to high positions within Local, State and Federal politics and have represented all the major political parties.

Steve Bracks, the Premier of Victoria is the most recent notable example to join the numbers of Parliamentary representatives of Lebanese orgin in Australian parliaments at present. There has also been other notable figures such as Sam Doumany who was Attorney General and Minister for Justice in Queensland and Dr. Frank Gaha who was Minster for Health in Tasmania and Queenslander Robert Katter was a Federal Minister for the Army.

Sir Nicholas Shehadie and George Joseph were Lord Mayors of, respectively, Sydney and Adelaide. They are among the many members of the Lebanese community who have achieved public office in local government. Currently a list is being compiled for our records.

One interesting figure that we have come across was Anthony Alexander Alam.

According to the Biographical Register of the New South Wales Parliament 1901-1970, Alexander Alam was born in Wallsend in 1896. He was the son of Joseph Alam and Mary Hashem who are described as being "storekeeper and Lebanese migrants".

He lived in various country centres including The Rock, Riverina and established Alams Limited, merchants of Dubbo, Delegate and Dunedoo. He was also the managing director of the Austrahan Fur Exporting Company. He became a contract builder in Sydney and was director of Mala Homes Pty Ltd (anagram of Alam!), Zebra Motels Pty Ltd and A.A. Alam Pty Ltd.

Alam was an active member of the Labor Party being a president of that Party's Gwydir, Dubbo and Wammerawa branches. He represented Labor in the New South Wales Legislative Council from December 1925 to April 1958, when he retired from that position. He later filled a casual vacancy from November 1963 to April 1973 when he again retired.

Alam was therefore a MLC for 43 years. Some members of the Lebanese community in New South Wales may remember Anthony Alam. As well as being a significant political figure, he and his wife were well regarded in the Lebanese and wider commumty and participated in many charitable, business and social events.

Alam and his wife Mrs Therese Alam (nee Anthony) were instigators behind many charitable endeavours for the Maronite community, for the Lebanese community and the community in general. One of Mrs Alam's notable efforts was to raise funds to purchase ambulances to transpont Australian troops and others injured during World War II as President of the Lebanese Ladies War Comforts League of Australia. See an interesting press clipping that encapsulates the spirit of some of the activities of the fundraising events Alam took part in.

A number of the ambulances apparently found their way to Lebanon and as well as transporting injured Australian troops, were also used to transport injured civiilians.

It has been said that some years later, in gratitude, the Lebanese Government presented Australia with a number of cedar sapplings (Cedars of Lebanon). Some members can remember being shown the saplings growing strongly in a garden in Canberra. However, with the passing of years, their exact location has been forgotten but we are making enquiries to see if they have survived into adult trees.

we are proud of our heritage