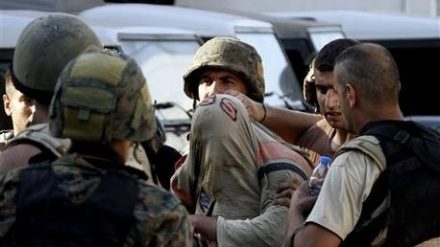 The Speaker and Head of AMAL movement Nabih Berri denied on Wednesday reports saying that his supporters and Hizbullah members participated alongside the army in the battles in the southern city of Sidon.

“I urged AMAL supporters and the Haret Saida's residents to exercise self-restraint,” Berri said in comments published in local newspapers.

He stressed that the army has the right to strike with an iron fist and its simplest duty obliges it to maintain security and stability across the country.

“The army has the right to take the appropriate measures as there are no red lines confronting it,” the speaker said.

He pointed out that there are no areas that the army can't reach, saying: “We support it in preventing any security violations including in the Beirut's southern suburb.”

AMAL chief noted that he held several phone calls with Hariri concerning the situation in Sidon.

Hariri stressed on Monday that al-Mustaqbal movement “will remain with the army,” saying the military institution did the right thing by confronting Asir.

A two-day battle between the Lebanese army and followers of a radical Salafist Sunni Muslim sheikh Ahmed al-Asir Abra killed 18 soldiers and wounded around 50 others.

More than 20 of Asir's supporters were killed, according to a security official.

Dozens of them were also arrested, but there was no sign of the cleric. The army has launched a manhunt for Asir.