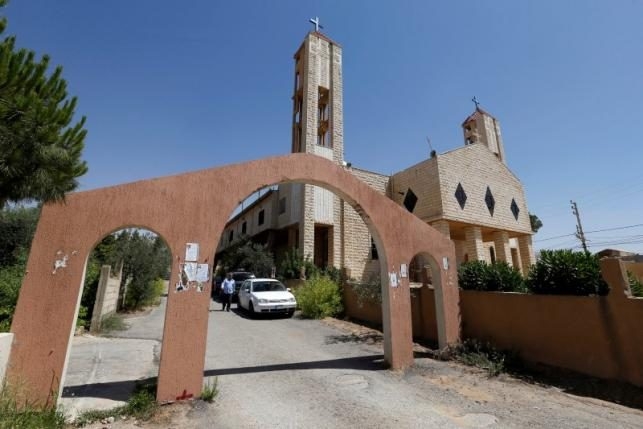 Fresh suicide bombings rocked the eastern border town of al-Qaa on Monday evening, injuring eight people, only hours after four suicide bombers killed five people and wounded 15 others in the town before dawn.

In the latest violence, three suicide bombers riding motorcycles blew themselves up in the center of the predominantly Christian town, a security source told AFP.

One struck in front of a church and the two others in front of the municipality building, the source added.

"Clashes are ongoing on the outskirts of the village between the Lebanese army and armed groups," a security source said.

Military sources confirmed to LBCI television that four blasts rocked al-Qaa in the evening and that no one was killed other than the attackers.

“The Airborne Regiment is staging raids in the town and the nearby areas and it urges al-Qaa's residents to stay in their homes,” the sources added.

In the pre-dawn attack, five people were killed and fifteen others were wounded when four suicide bombers targeted the town.

"The first attacker knocked on one of the homes in the village, but after the resident became suspicious, he blew himself up," a military source told AFP.

"People began gathering at the site of the explosion and the three other suicide attackers blew themselves up," he added.

A security source had said earlier that a bomb had exploded and then "more than one suicide bomber blew themselves (up)."

The Lebanese army said in a statement that the “first explosion took off at 4:20 am where a suicide bomber detonated himself close to one of the houses in the town. Three suicide explosions followed but at different interval in a street adjacent to the first.”

The statement added that the attackers were wearing explosives belts that weighed two kilograms each.

He said 15 other people were wounded, including some in critical condition.

The victims were transported to the Hermel Governmental Hospital, NNA said.

Three Lebanese soldiers who were stationed in the area were wounded and transported to the hospital, said NNA.

The agency listed the names of those who were killed in the pre-dawn attack as Faysal Aad, Joseph Lebbos, Majeb Wehbe, Bulos al-Ahmar and George Fares.

Those wounded were transported to the Batoul Hospital in Hermel and were identified as Khalil Wehbe, Bassel Matar, Milad Matar, Shadi Mokalled, Marwan Lebbos and Dunya Shahoud.

An AFP correspondent in the village said security forces had cordoned off the site of the blasts, which lies on a main road linking the Syrian town of al-Qusayr to Lebanon's eastern Bekaa Valley.

The road cuts through a residential area in the center of Al-Qaa, and the explosions took place less than 100 meters from the village church.

"Al-Qaa is the gateway to the rest of Lebanon, and here we stopped a plan for a much bigger explosion," said al-Qaa mayor Bashir Matar.

He confirmed that the second and third suicide attackers detonated their explosives "as people gathered to treat the wounded."

"We chased the fourth attacker and shot at him, and he blew himself up," Matar said.

Resident Fadi Bsherrawi said he woke up when he heard the first blast, but went back to sleep thinking it was just fighting near the border.

"I really woke up to the sound of the second attack," he told AFP.

He spoke with neighbors after the attack who told him that one Muslim resident was having a morning meal before beginning his day of fasting for Ramadan when he saw a strange group of men outside.

"He went outside to talk to them and they wanted to stir things up. So his son fired on them with a hunting rifle" before the explosions started, Bsherrawi said.

Local paramedics began to arrive after the first suicide attack.

"One rescue worker who was trying to carry a wounded man was killed when the second terrorist suicide bomber came," he said.

"We have guards all the time. The village is always ready and people are on edge," he added.

Health Minister Wael Abou Faour ordered all hospitals to receive people wounded in the bombings and treat them at the ministry's expense.

Media reports said that the Lebanese army cordoned off the blast scene and kicked off 'combing operations' in search for suspects.

Al-Qaa is one of several border posts separating Lebanon and war-torn Syria.

The border area has been rocked by clashes and shelling since Syria's conflict erupted in 2011.

Lebanon's army has fought off jihadist factions along the frontier and has sought to clamp down on local cells operating in the area.

In August 2014, the army clashed with the Islamic State group and Al-Nusra Front, al-Qaida's affiliate in Syria, in the border town of Arsal.

As they withdrew, IS and Al-Nusra kidnapped 30 Lebanese soldiers and policemen, 16 of whom were released after nearly 18 months of negotiations.