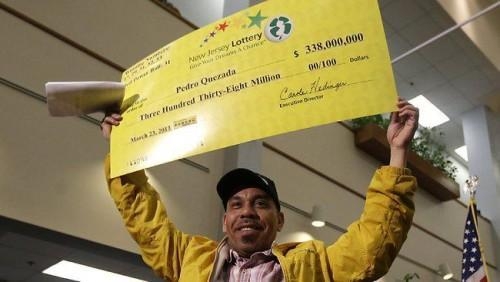 A DAY after winning a $US338 million Powerball jackpot, Pedro Quezada said he does not know what he's going to do with the money.

"I have to think about it. My mind is not clear yet,'' Quezada said through a translator at New Jersey Lottery headquarters. But he said he will help his family and have some fun.

"I'm just going to have a little spin around."

The 44-year-old, who has put in long hours at the family's bodega in Passaic, N.J., said he has also not decided whether to stay in New Jersey or move to his native the Dominican Republic, which he left at age 19.

But Quezada said he has already decided to buy a new car.

What kind does he drive now?

Flanked by his wife, children and other family members, Quezada declined to answer reporters' questions about the difficulties he has faced as an immigrant and small business owner.

"I don't want to speak about it because my life has changed,'' he said when asked about a 2009 fire in his bodega.

He declined to say how much he made each year at his store.

"These millions of dollars have erased whatever I made before,'' he said.

The jackpot was the fourth largest prize in Powerball history.

Quezada said he played the lottery two or three times a week at Eagle Liquor, on Passaic Street, because it was located between his home and his store.

When he walked into Eagle Liquor with his Powerball ticket Monday, he did not know he had won the jackpot, he said at Tuesday's press conference.

"I had no idea I was a winner,'' he said. "When I saw the commotion outside, I thought maybe this was the store that sold the winning ticket.''

Quezada answered reporters' questions in Spanish. His responses were translated by Jennifer Rodriguez, a security guard for the lottery.

He said he already has a financial plan worked out, but he does not know whether he will take the prize as a lump-sum or an annuity paid out over time. The lottery doesn't provide financial planning or other services.

If the he chooses the lump sum, it will be worth $US211 million - about $US152 million after state and federal taxes, lottery executive director Carole Hedinger said at a press conference Monday.

Read the full story at www.NorthJersey.com