Two Israeli soldiers were killed and seven wounded on Wednesday in a Hizbullah attack on a military convoy in the occupied Shebaa Farms.

The Israeli army announced that two of its troops were killed, while a spokesman said seven Israeli soldiers were “lightly-to-moderately wounded” in the attack.

Chief Israeli army spokesman Brigadier General Moti Almoz explained that the unrest unfolded when an anti-tank missile fired from the South struck an Israeli military vehicle that was traveling with other vehicles, reported Jerusalem Post.

No one was kidnapped in the incident, he added.

"This is not necessarily the last response," Almoz warned on Twitter.

The attack in the occupied-Shebaa Farms prompted Israel to shell areas in southern Lebanon in a significant escalation along the volatile border.

No Lebanese citizens were injured in the Israeli shelling.

According to al-Jadeed television, the Israeli army informed UNIFIL that it would not carry out further strikes in response to Hizbullah's operation.

The Israeli army said an anti-tank missile targeted the vehicle near Shebaa Farms, a disputed tract of land where the borders of Israel, Lebanon and Syria meet.

The army said the residents of the area were ordered to remain in their homes.

“Three of the missiles hit the IDF convoy and 1 hit a home in Ghajar,” the official noted.

The Israeli army identified its slain troops as 25-year-old Captain Yochai Kalangel, an officer in the Tsavar Battalion of the Givati Brigade, and Sergeant Dor Haim Nini, 20, a member of the same battalion.

Citing a preliminary military investigation, the Jerusalem Post newspaper said “at least five Kornet missiles were fired at the Israeli convoy from a distance of at least four kilometers.”

“A military D-max vehicle was the first vehicle hit in the attack, prompting all of those inside an IDF jeep behind it to quickly evacuate the vehicle before it too was hit with missiles. The subsequent injuries came from military vehicles nearby,” the Jerusalem Post added.

Images broadcast from the scene showed large plumes of white smoke billowing across the area and police sealed off several roads close to the border in northern Israel. 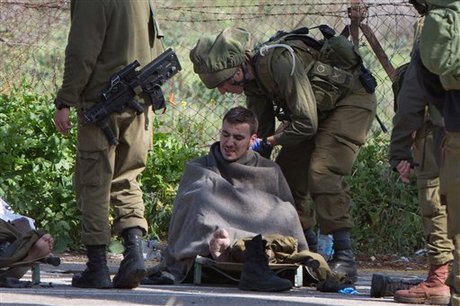 The officials said the shelling targeted the border villages of Majidiyeh, Abbasiyeh and Kfarshouba near the Shebaa Farms area.

Two sources told Agence France-Presse that more than a dozen shells had been fired on Lebanese border villages and that Israeli warplanes were flying over the area.

"At least 15 shells have been fired against five villages in the south," one security source said, adding that Majidiyeh was hardest hit.

A 36-year-old Spanish corporal from the U.N. peacekeeping force in southern Lebanon was killed in the exchange of fire, officials said.

The 10,000-strong UNIFIL mission said it had observed 11 rockets fired towards Israel from southern Lebanon and that Israeli forces "returned artillery fire in the same general area."

It said the precise cause of the peacekeeper's death was "as yet undetermined" and urged all sides to show "maximum restraint to prevent an escalation."

“At around 11:30 am this morning, UNIFIL observed six rockets launched towards Israel from the vicinity of Wazzani north of Maysat in the UNIFIL area of operations. The IDF returned artillery fire in the same general area,” UNIFIL said in a statement.

UNIFIL Commander Major-General Luciano Portolano was in immediate contact with the parties to help control the situation and prevent further escalation, it added.


“In the meantime, at around 1:30 pm five rockets were fired from the general area of Kfarshouba towards Israel. The IDF fired artillery rounds towards the source of fire,” UNIFIL said.

Lebanon's National News Agency said that Hizbullah retaliated to the Israeli attacks by shelling an area near Shebaa Farms.

Wednesday's developments came amid heightened tension after the January 18 Israeli strike against a Hizbullah convoy in Quneitra on the Syrian side of the Golan Heights.

The strike killed six Hizbullah members, including Mohammed Issa, a commander responsible for its Syrian and Iraqi operations, as well as Jihad Mughniyeh, the son of Imad Mughniyeh, a top Hizbullah operative killed in a 2008 car bombing in Syria which was blamed on Israel.

Senior Iranian general Mohammad Ali Allahdadi was also killed in the Israeli attack, which had prompted Tehran to warn Israel that it should "await destructive thunderbolts." 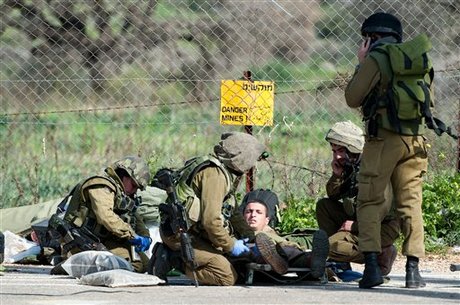 Hizbullah said in its claim of responsibility that it targeted several vehicles transporting officers and soldiers with missiles to avenge the Israeli raid on Quneitra.

The party's fighters from a group calling itself the "heroic martyrs of Quneitra” destroyed a number of Israeli vehicles and caused casualties among "enemy ranks,” it said in a statement.

Al-Manar TV said Hizbullah targeted nine vehicles, and that it had killed "a large number" of troops.

The army "is ready to act with force on any front," he added, warning that Israel's response to any attack would be harsh.

In the evening, Netanyahu convened an emergency session with Israel's security chiefs to discuss options, his office said.

The premier "is at this hour convening a security situation assessment at defense headquarters in Tel Aviv," his office said, adding among those taking part were Defense Minister Moshe Yaalon, armed forces chief Lieutenant General Benny Gantz, and the head of the Shin Bet security service.

"Those behind today's attack will pay the full price," the statement quoted Netanyahu as saying, accusing Iran of using Hizbullah as a proxy along Israel's northern flanks.

Netanyahu also sent a warning to the Lebanese government of Lebanon and to Syrian President Bashar Assad from whose territories Wednesday's attack and Tuesday's rocket fire on the Golan Heights were launched.

"The government of Lebanon and the Assad regime share responsibility for the consequences of attacks originating in their territory against the state of Israel," he said.

Hardline Foreign Minister Avigdor Lieberman said Israel should respond to the attack "in a very harsh and disproportionate manner, as China or the U.S. would respond to similar incidents."

Israel's Yediot Ahronot newspaper meanwhile said "Hizbullah sent a message to Israel via the U.N. peacekeepers' commander in Lebanon on Wednesday night, saying the organization was not interested in further escalation and describing the ambush as 'an eye for an eye' revenge for a Jan. 18 strike in Syria." 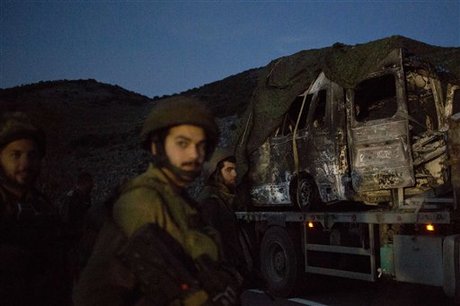 Israel told the U.N. Security Council that it will exercise its right to self-defense after the Hizbullah attack.

"Israel will not stand by as Hizbullah targets Israelis," wrote Prosor.

"Israel will not accept any attacks on its territory and it will exercise its right to self-defense and take all necessary measures to protect its population."

Israel declared its northern and Golan region as a military zone in the wake of the Shebaa attack.

On the Israeli side, Israeli security sources said at least one house in the divided village of Ghajar had been hit but there was no immediate word on casualties.

Half of the village lies in Lebanon and the rest lies in the Israeli-occupied sector.

All roads to the village were blocked off by Israeli police, with a crowd of villagers anxiously waiting to get home to check on their families.

"Three houses were hit by rockets," said Hussein, 31, relaying what he had heard by telephone from relatives in the village of 2,000 inhabitants.

He said a number of villagers had been wounded but did not know how badly.

Other frantic family members argued with police to be allowed in to collect their children, who had been locked inside the village school for their own safety.

In 2006, Israel fought a bloody war against Hizbullah that killed more than 1,200 people in Lebanon, mostly civilians, and some 160 Israelis, mostly soldiers.

The Shebaa Farms area is a mountainous, narrow sliver of land rich in water resources measuring 25 square kilometers. It has been occupied by Israel since the 1967 Middle East war.

Since Israeli troops withdrew from south Lebanon in 2000, Shebaa has become an area of friction between Israel and Hizbullah.