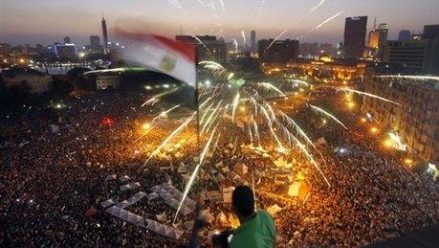 Egyptians flooded the streets on Sunday determined to oust Islamist President Mohamed Morsi on the anniversary of his turbulent first year in power, in the biggest protests Egypt has seen since the 2011 revolt.

A sea of jubilant protesters converged on Cairo's Tahrir Square and the large avenue outside the presidential palace, as well as in several others squares of the capital as army helicopters circled overhead.

One person was killed and about 40 injured when clashes broke out between supporters and opponents of Morsi in Beni Sueif province, south of Cairo, a security official said.

The clashes erupted outside the offices of the Freedom and Justice Party, the political arm of Morsi's Muslim Brotherhood, the source said, adding the casualties had been taken to hospital.

Another person was killed in the central province of Assiut when gunmen on a motorbike opened fire on protesters, a security official said.

The incident also took place outside an office for the Freedom and Justice Party.

Police sources told Agence France Presse that hundreds of thousands of protesters had taken to the streets in Cairo alone.

But citing army estimates, a military source told Agence France Presse that "millions" of protesters took to the streets of Egypt.

"It is the biggest protest in Egypt's history," the source told AFP on condition of anonymity.

The source said pro-Morsi protesters who gathered at a rival demonstration in Cairo's Nasr City neighborhood were estimated to number around 25,000.

As chants of "Leave!" rang around the capital, the presidency insisted that dialogue was the only way out of the crisis.

"Dialogue is the only way through which we can reach an understanding... The presidency is open to a real and serious national dialogue," presidential spokesman Ehab Fahmy told reporters.

Anti-Morsi protests were also being staged in the coastal city of Alexandria, the Nile Delta cities of Mansura, Menuf, Tanta and Mahalla, the canal cities of Suez and Port Said and in the president's hometown of Zagazig.

"The people want the ouster of the regime," the protesters chanted, echoing the signature slogan of the 2011 revolt that ousted Hosni Mubarak and brought Morsi to power.

"This is the second revolution and Tahrir is the symbol of the revolution," said carpenter Ibrahim Hammouda, who came from the northern city of Damietta for the protest.

The headquarters of the Muslim Brotherhood was attacked in the evening with petrol bombs, the Islamist movement and security officials said.

Around 150 "thugs" attacked the building in the Moqqattam neighborhood with molotov cocktails, birdshot and stones, said Gehad al-Haddad, a spokesman for the Muslim Brotherhood.

Morsi supporters had held days of demonstrations in a show of strength and vowed to continue doing so to defend his legitimacy, raising fears of confrontations.

Police and troops have deployed at key buildings nationwide, security officials said, and the health ministry said hospitals are on high alert in case of violence.

A senior security official said the Suez Canal, the vital waterway connecting the Mediterranean with the Red Sea, is under "maximum security".

Banks and most offices closed for the day.

The grassroots movement Tamarod -- Arabic for rebellion -- claims to have collected millions of signatures to a petition demanding Morsi's resignation and new elections.

Posters urging people to join anti-Morsi protests were plastered on walls across Cairo and stuck on car windows, along with "June 30" graffiti.

The week ahead of the showdown has seen eight people including an American killed, and scores more injured as rival demonstrators clashed.

His opponents accuse him of betraying the revolution by concentrating power in Islamist hands and of sending the economy into free fall.

Morsi supporters say he inherited many problems from a corrupt regime, and that he should be allowed to complete his term which ends in 2016.

Any attempt to remove him from office, they argue, is a coup against democracy.

Fervent displays of emotion from both camps highlight the deep divisions in the Arab world's most populous country.

The army, which led a tumultuous transition after Mubarak's ouster, has warned it will intervene if there is major unrest.

Since taking office, Morsi has battled with the judiciary, the media and the police. The economy has nosedived, investment dried up, inflation soared and the vital tourism sector been battered.

Many Egyptians stocked up on food and withdrew cash ahead of Sunday's rallies, and long queues at petrol stations brought some parts of Cairo to a standstill.

On Saturday, at least eight deputies resigned from the Islamist-dominated Shura Council, in a boost for Tamarod which says it now has 22 million signatures to its petition.

The figure, which compares with the 13.2 million votes to 12.3 million by which Morsi won election last year, cannot be verified.

Morsi supporters are steadfast in defending his legitimacy.

"We will not allow a coup against the president," senior Brotherhood leader Mohamed al-Beltagui told a Cairo rally.

Demonstrator Kamal Ahmed Kamel echoed him, saying: "It's not just about Morsi, it's about legitimacy and the state. We can't go backwards."

Morsi's opponents deny that removing him would be a "coup", saying calls for his resignation are aimed at restoring the revolution's cornerstones of democracy, freedom and social justice.

In a televised speech on Wednesday, Morsi warned the polarization threatened to "paralyze" Egypt as he tried to placate protesters with appeals for dialogue and promises of constitutional reform.

"Everybody has to denounce violence. We would like to see the opposition and President Morsi engage in a more constructive conversation about how to move their country forward," Obama said.