10 things to do in Batroun 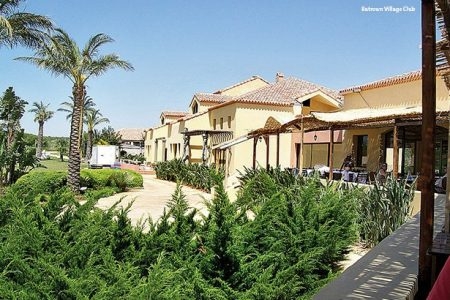 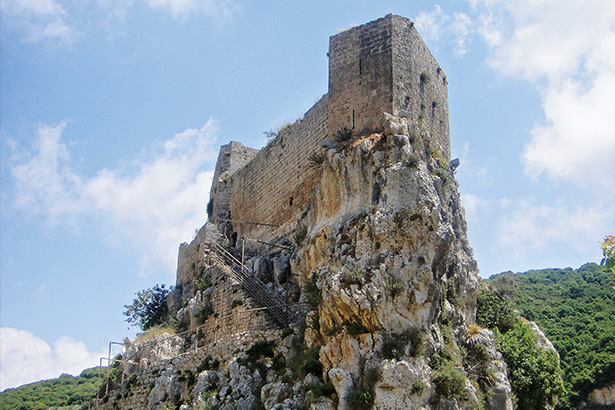 1. Take in the History

Batroun is a treasure trove of Phoenician, Roman and Byzantine history. Its existence can be traced all the way back to pre-historic times, with early tools retrieved within caves along the Nahr el Jawz river. Nearby, is the fairytale castle of Mseilha, a medieval fort built by Emir Fakhreddine II in the 17th century to guard the route from Tripoli to Beirut. Perched high above a narrow limestone rock, the citadel and surrounding landscape was recently renovated to make it more accessible to visitors. The natural sea wall adjacent to the old harbor, reinforced by the Phoenicians, is the current site of the annual Batroun Festival. To the north is the Roman theater with its nine remaining steps and the old souks, a charming cobblestoned market with vaulted sandstone archways. End your day at the ruins of Makaad el Mir (Prince’s Rock Seat) with a tall glass of Batroun’s famous lemonade. 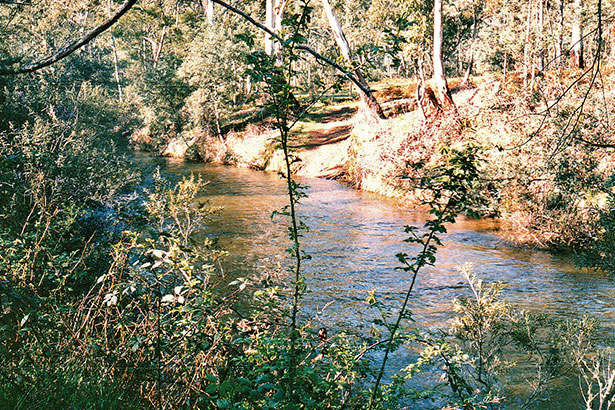 2. Revel in the outdoors

Batroun’s distinct topography allows you to enjoy both sea and mountains all in the span of a few minutes. Heading up 11 kilometers from the city is one of the most beautiful trails along the el Jawz river. Lined with walnut trees near the river’s edge, the trek is fairly easy and picturesque. For experienced hikers, begin at the village of Rashkida continuing until Beksmayya Bridge and then head uphill to Kfarhay where the monastery of St. Maroun is located. Don’t miss the Kfar Halda water source, the Daleh, El Ghawawit and El Toufah Springs. You can also tour the prominent sites near the port by bike or skip the car ride to Batroun altogether and bike it from Beirut. 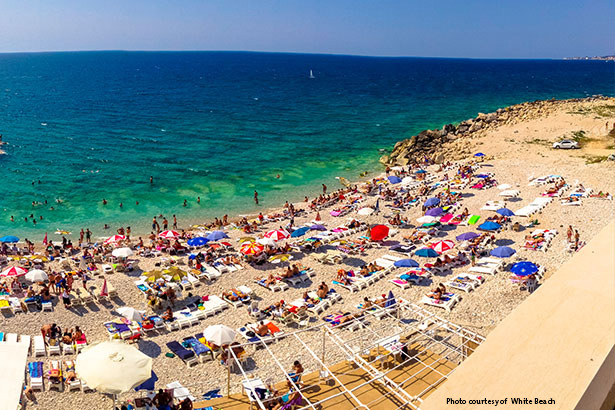 3. Relax on the beach

The crystal clear waters of Batroun can be enjoyed from a number of beach resorts, including the trendy Bonita Bay, Pearl Beach and White Beach – a stretch of tiny white-pebbled waterfront with the best windsurfing in the area. At Pierre & Friends, “laid back” is a way of life. Watch the waves crash on the rocky shore with a bottle of beer, until you’re in the middle of a full-blown beach party. 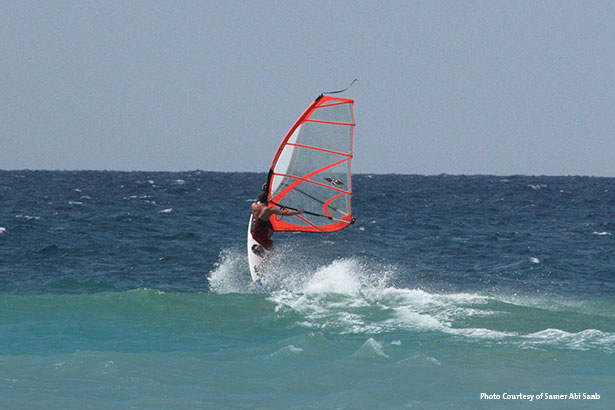 Batroun is infamous for its gangs of surfers aptly called “Pirate” and “Hurricane” who access the area’s prime surfing spot through Blue Bay. This area is also great for windsurfing and body boarding. For formal instruction, White Beach offers windsurfing lessons with Samer Abi Saab and Batroun Water Sports has the Quicksilver Surf School. Divers can explore the deep blue sea with Pure Tech Diving Facility at the San Stephano resort. Most Batrounis can sail before they can walk and the Lebanese Yacht Club and Sailing School caters to everyone from novice to professional sailors of all ages. If you’re there in mid-July, don’t miss the Laser Sailing Championship.

Batroun is famous for its lemonade so a tall glass is a must from Chez Hilmi Café or Limonade Tony Daou. One of Batroun’s unofficial landmarks is Chez Maguy’s next to the Makaad el Mir site. You probably need to ask a local for directions since the walkway getting there literally ends up in Maguy’s makeshift house. Le Marin’s seafood and views are unbeatable, but the true taste of Batroun can be found at Batrouniyat – an old stone house turned into a restaurant/pantry house with homemade preserves, olive oil and regional specialties. Batroun by night is giving Beirut a run for its money. Its main street is lined with plenty of pubs and nightclubs to choose from. Landmark clubs include Taiga and the new Taiga Sky on the rooftop of San Stephano, as well as Pierre and Friends. Centro, Castello and X-Ray are all local favorites, but if you’re lucky enough to visit in July, you’ll get a taste of Batroun’s Open Air Party – an explosion of nightlife where clubs close indoors and party in the street. Why not turn your day trip into a weekend getaway at one of Batroun’s beach resorts. Aqualand and San Stephano Resort are in the old town and have plenty of activities to choose from. For a more luxurious stay, bask in the sunlight in Batroun Village Club’s infinity pool or stay in a quaint cave room – an old house transformed through modern amenities. Nestled in a little valley overlooking the Mediterranean, Beit Al Batroun Bed & Breakfast is a haven of peace, a countryside retreat on the Lebanese sea coast. 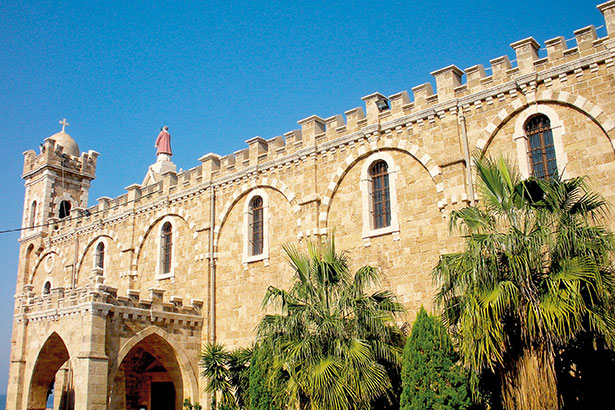 On the north end of Batroun overlooking the old harbor is the Maronite cathedral of St. Stephan (Mar Stefan). The 13th century Greek Orthodox St. George Church (Mar Gerges) is nearby with its impressive dome and the tiny chapel known as Our Lady of the Sea (Sadiyat al-Bahr), which overlooks Batroun's sea wall. A short drive to the region of Kfarhay to visit the Monastery of St. Maroun is well worth the trip. Father John Maron, who many believe is the founder of the Maronite community in Lebanon, built the monastery to enshrine the relics of the saint including his actual skull and books dating back to the 15th century. 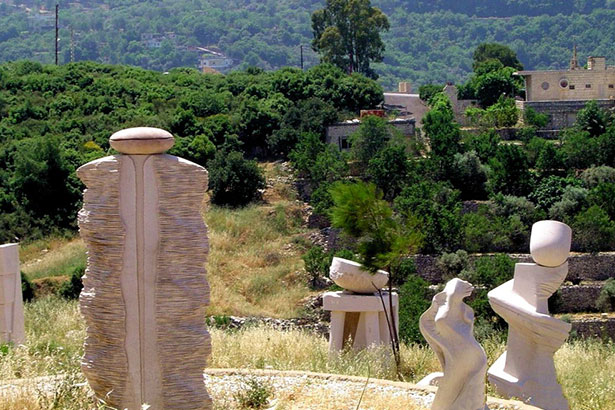 Through the winding mountain roads of Rashana, a scenic drive slowly transforms into an unlikely home for art. Deemed the “International Capital of Sculpture in Open Air” by UNESCO, the work on display and the subsequent notoriety is due to the famed Basbous family - brothers Michel, Joseph, Alfred and Michel’s son Anashar. Streets lined with limestone, steel, aluminum, bronze, wood, cement and stone sculptures emerge from the ground, surrounded by wild daffodils. Drive past the villas with creative gates to the open-air museum, where you’ll find 60 years of artwork as well as Michel’s one-story home, constructed entirely without any right angles. His widow Therese explains that the house was created so that he could “live inside a sculpture.”

We visit this idyllic village with some Batroun’s staunchest advocates, who spend a lot of their time both creating and relaxing in its incredible atmosphere

“Batroun is the perfect fishing village that is still very authentic...The ideal way to spend a summer day is to get up early and go for a swim in one of the coves. Then partake of an excellent manouche and glass of lemonade at the 'garage' in front of the St. Stephan Church. Take a stroll through the old souks and buy fresh fish and vegetables from Stephan Elias for lunch. If you don’t want to cook, then during the week lunch at Jammal, as the weekend can be too crowded, and have another swim. After a siesta stroll to Chez Maguy for a sunset drink followed by a dinner. Do not miss her roasted Coquille St. Jacques! If you have the energy to go dancing, then Taiga is a must!”

“You don’t go to Batroun…it comes to you. When stars align, when you are ready, Batroun will call and whisper its promise of a sweeter life in your ear. Most Beirutis are quenched with White, Bonita Bay and Pierre & Friend’s beaches, but it gets better 5 km ahead. Dolce-Vita dawns at Joining Beach, passes through The Lady of the Sea and sunsets at Chez Maguy. Batroun’s 'peace and love' people turn down most jobs in crazy Beirut, and their dreamy smile will taunt the tourist… But unless you are worthy, their secrets will be hushed and they’ll only share a sunset beer from “RAY” at the “Bahssa” and that’s already taking breath!”
Ana Larriu, interior designer

“Batroun is total 'unwind' and 'let go' place for me. It is very much being in the cocoon of my garden and my house - or facing the sea breeze and the sunset, on a rock over the water at Chez Maguy!”
Kamal Mouzawak, food artisan, culinary activist and founder of Souk el Tayeb, Beirut’s first farmer’s market